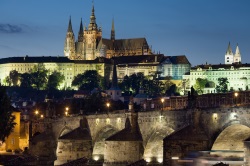 Prague, is the capital and largest city of the Czech Republic. Its official name is Hlavní mìsto Praha, meaning Prague, the Capital City. Situated on the River Vltava in central Bohemia, Prague has been the political, cultural, and economic centre of the Czech state for more than 1100 years. The city proper is home to more than 1.2 million people, while its metropolitan area is estimated to have a population of over 1.9 million. Since 1992, the extensive historic centre of Prague has been included in the UNESCO list of World Heritage Sites. According to Guinness World Records, Prague Castle is the largest ancient castle in the world. Nicknames for Prague have included “the mother of cities” (Praga mater urbium, or “Praha matka mìst” in Czech)”, “city of a hundred spires” and “the golden city.

The Czech Republic short form in Czech, is a landlocked country in Central Europe. The country borders Poland to the northeast, Germany to the west, Austria to the south, and Slovakia to the east. The capital and largest city is Prague (Czech: Praha). The country is composed of the historic regions of Bohemia and Moravia, as well as parts of Silesia. The Czech Republic is a member of NATO (since 1999); and the European Union (since 2004). As of January 1, 2009, the Czech Republic holds the EU Presidency.